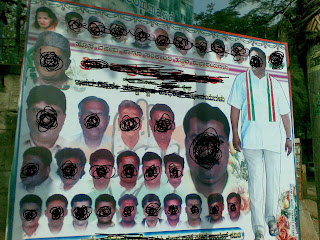 Hi there, me back with some junk [as usual]. Just have a look at the photo attached, yes its the same which we see daily and try to ignore, one fine day since i was stuck at some signal, I used my 6300 to take this one specially for this post.

Now whats wrong with these ppl, I have been thinking about this post or rather about this issue from past 3 months, never got time to write and i feel today its the right time. Daily on the road side we see such kind of vinyl banners, containing some 30 + photos embedded using photo shop spoiling the beauty of the city. You can see such photos every where , nowadays there is no reason left for them to affix all of their photos and just place it where ever they want.

The above photo is kept wishing birthday of some idiot, and his fan following. I have seen such kind of vinyl boardings just containing some 40+ photos and all of them placed tightly in a single frame. The reason for keeping such kind of boardings is as pathetic as the frame itself, some of the examples are wishing birthday, or wishing for the completion of one year in the party, or some group of idiots doing some poooja or some ppl for distribution of cloths to poor ppl.

The reason might be noble one , but my question is why do we need such big posters and that too containing so may photos. If you are trying to wish some one why cant you do it personally or even if you want to celebrate go and distribute sweet or whatever to poor ppl , but why to spend some thousands of money to spoil the nature. It looks so ugly and these posters lie there for months together even thought the occasion lasts for one day.

I have seen hell lot such boardings and every time i see them , i feel very much angry and my blood boils . Why the hell should i watch a big boarding containing photos of hundreds of idiots of different sizes and shapes, and that too at traffic signals, Nowadays I have controlled my anger as i cant do anything about , so thought i will crib here and i am done with it. If you are one among those hundred parties or group of ppl celebrating birthday of someone please try avoiding such a nonsense activity of placing a big vinyl banner with so many photos . Please we can do lot of things rather than wasting money on this and spoiling nature. :)


PS: All my anger got decreased even i was feeling happy when i was painting black on the faces :) . I pity the graphic designer who does this daily as a part of his job. poor chap .
Posted by Srinivas B.P at 4:51 AM

>"if you are one among those"
you think partymen read blogs? ;)

I'll post my detailed comment later but tell me why you didnt paint black on that stupid lady Sonia Gandhi among all??