Hi ,
I wish u all a happy shivarathri :) May the lord shiva make all your dreams come true. Today is shivarathri a very special day. As the name suggests Shiva rathri is more famous for "Jagarane" , which means not sleeping whole night and praying shiva. 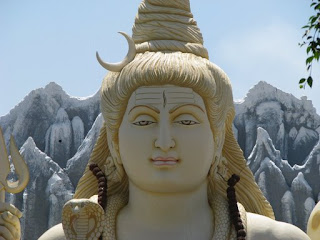 Shivarathri has always been a special festival at home. Now regarding jagarane i have some nice moments till date, thought of sharing them one by one....

As i dig through my memory ... when i was kid , i used to say to mom , with full josh that "this time i am going to do jagarane , so please dont force me to sleep ok". mom used to reply "let me see how long it goes ". and i used to think big deal one day i can easily skip sleeping.... now after dinner the next program is to sleep, since i have already declared about my jagarane, i was thinking what to do.. ok let me watch the movie. In those days Doordarshan was the only tv channel, and they used to play a devotional movie only after 1AM. So i used to wait for that, but i was never successful and used to sleep either just before the movie, or used to sleep after watching the initial titles of the movie, the next morning mom and dad used to tease me for not doing jagarane.

Then came an era where we friends used to discuss among ourselves the plan for jagarane. I think it was 8th standard , we decided to do jagarane at chummy's house. With all josh we entered sumanth's house played cricket / badminton under lights . and then what?? At 12 o clock sumanth's mother gave us payasam, and within half an hour ,all of us were in deep sleep. the next day sumanth' mother asked ... "aha aha jagarane anthe jagarane 12 o clock ella nidde..."
.... thats it same thing again happened in 9th standard , in chummy's house me and raghu , only difference is like i slept at 1'o clock. That day i was thinking simply to sleep i came here che....

But the most memorable shivarathri was when i was in 10th standard. This time it was just me and sumanth. It was just study holidays and we were having exams next to next week of shivarathri. I had firmly decided that i should do jagarane at any cost. And i had decided that i will read Biology subject completely whole night. so we started at 10 o clock and sumanth told me" seena plz just 2 mins i will get up my eyes are burning but i am sure i will get up after 2 mins" , thats it after half an hour i tried to wake him up but i could not . But since i had decided to read I went on and on and on and on... not even a single time i felt like sleeping . that too after sumanth slept i had wonderful concentration and i finished chapter by chapter . And exactly at 6 o clock in the morning , i turned the last page of biology book , sumanth's mom came and opened the door and she was shocked at the sight, and asked you were awake whole night, and i told her yes aunty I was so happy at that time , i was feeling like i had won a battle. i got up and went to my home and thats it.... jagarane was successul..... :)

I had read that subject so well that i never bothered to revise the day before exam. Poor chap chummy was in trouble as i was the one who used to plan the study time table there was not even a single day allocated for biology , somehow he managed to read by himself [sorry sumanth ;)].

Thats it till date , i never got that much determination to do jagarane. All my attempts to do jagarane just went unsuccessful. Many a times i had plannned for watching movies, tv, net ... once even tried learning c#/.net . but i could not do any of them.

Now today is shivarathri , and i have decided this time i will surely do jagarane. ITs 10:23 PM and i am still writing this lengthy post.... the next program is to visit Temple nearby [as it will be very less crowded ] . This time my jagarane program starts at 11:00 PM . Have something in mind . Let me see how far it goes.... I hope i will be successful this time atleast :) will tell you in my next post.

May all your dreams come true. Try celebrating shivarathri :)

PS: this time also when mom heard that i am going to do nightout she was like ... aha aha nodona antha.... I hope i will be successful this time.