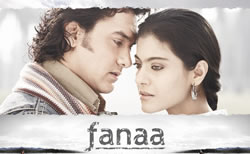 Yesterday i saw Fanaa. Thank god i saw this movie in a VCD. I felt i wasted 3hrs. Another piece of junk to Indian Cinema. Most awaited movie Fanaa disappoints all your expectations. Even Presence of Aamir and kajol as a pair for the first time cant help its story.

Mainly fanaa has got a week story line which is really hard to believe. Nobody can believe in the story. Its like this---> Aamir khan plays the role of terrorist [after a long time as anti patriot ] and kajol a blind girl[only for few mins] After that kajol goes to Delhi to perform some song on January 26th and there she meets Aamir and falls in love with him[as usual] another love story. Within 4-5 days they become so close that she is ready to go anywhere with Aamir.

Now comes the funniest part ... There will a Nuclear Bomb hidden in Delhi and it has got 6 triggers situated in different military base [ what a story] and aamir khan gets hold of one trigger and he will be attacked by military and then wounded aamir goes to one of the houses where he finds kajol again and after that bla bla bla and then in final scene Kajol kills aamir in order to save lakhs of indians dying from that nuclear Bomb.

In the climax u can see the talent of Tabu where she shoots a villan from one helicopter to other without missing him. What a fantastic talent... Not even experienced millitary officer can shoot a person sitting in another helicopter that too when both the helicopters are moving.

Anyways i could not write as i initially thought anyways i never expected such a bakhwas movie from Aamir khan movie.

Thats all.
Srini
Posted by Srinivas B.P at 9:49 AM

hi - adding you to my blogroll. thanks